Michael Billig coined the term Banal as a notion of ‘banal nationalism,’ when he was describing the implicit, taken-for-granted, everyday representations and practices that create and affirm ideas and feelings of belonging to the nation. (Billig, 1995). Billig’s definition then inspired Stig Hjarvard’s definition. Hjavard states that “…Banal Religion is a special kind of religion”. He further states that “…banal religion is a piece-meal fashion and removed from the framework of organized religion.” (Hjarvard, 2016). Both meanings suggest that various elements from different institutionalized religions are taken to form and create a new narrative which evokes interpretation and feelings to the audience. While Alexson argues that the term ‘banal’ should be abandoned and replaced with a concept that is much less charged. (Axelson, 2015). One agrees with the fact that if banal religion represents anything but boring, cliché nor common, there is no relation in terming this part of mediatized religion as Banal.

Banal Religion does not articulate that it is an inferior form of religion. On the contrary, banal religion is important in a modern society where religion is mediatized. “In a mediatized environment, religious legitimacy is not only produced by means of tradition and charisma but also rests upon voluntary acceptance by the individual and references to popular media culture.” (Hjarvard, 2016). This signifies that people become influenced not only by traditional religious institutions but also by popular culture and its interpretation of religion. This in-depth means that banal religion serves as a backdrop of religious messages however at the expense of the religious authority losing control over religious content (shifting authority) and the distortion of traditional religion. This is most common in Western countries where traditional institutionalized religions have little influence. Banal religion may occasionally provide criticism of institutionalized religions (Hjavard, 2012),  like how the Islam Religion was arguably criticized in the film Black Panther.

One may argue that the distortion of traditional religious messages is detrimental and diverts the purpose of religion which is to salvage and worship god(s). This distortion may result in the loss of religion essence. However, Banal religion serves as entertainment and it is not centered around metaphysics.

It can be evident from the Black Panther movie that banal religion is not centered around metaphysics. T’Challa (Chadwick Boseman) dies in the film and is seen conversing with his ancestors and comes to life again. (The Black Panther, 2018). As much as this is based on both African Tradition and Christian religion that one becomes a new creature; the old self dies; re-birth. However, it is not referring to a literal death but a character and spiritual death. Hence the emphasis that banal religion is supernatural and not centered on metaphysics.

While many watch films and focus on the entertainment part of the film, religious elements may go under the radar, unnoticed. Religious elements refer to religious symbolism and/or text that represents institutionalized religion. This may be a cross, shapes, crowns, clothing, and colors. This can be evident in Black Panther Film in the usage of various Religious Elements. Wakanda is the name of a god whose divinity was in hiddenness and whose powers were a mystery, (Manseau, 2018), hence the name of the fiction ‘hidden’ country is called Wakanda with mystery power called vibranium.

The lip plates worn by the Wakandan Elders are a symbolism for the tribes in Ethiopia, the Mursi and Surma Tribes. (See Annexure A).

The official home language of Wakanda was IsiXhosa, one of South Africa’s 11 official languages. The Black Panther’s female bodyguards wore the clothing inspired by the Masai people in Kenya and Tanzania. (See Annexure B).

The headdress worn by the Queen Mother Ramonda played by Angela Bassett is inspired by the Zulu headdress called isichotho, which is worn by Zulu women, the largest tribe in Africa. (See Annexure C).

One most overlooked religious element is the scarification marks on T’Challa and Killmonger’s body which represent the rite of passage into adulthood by the Ugandan Karamojong Tribe. (See Annexure D). All these traditional religious elements have been put together to create a new Wakanda narrative. 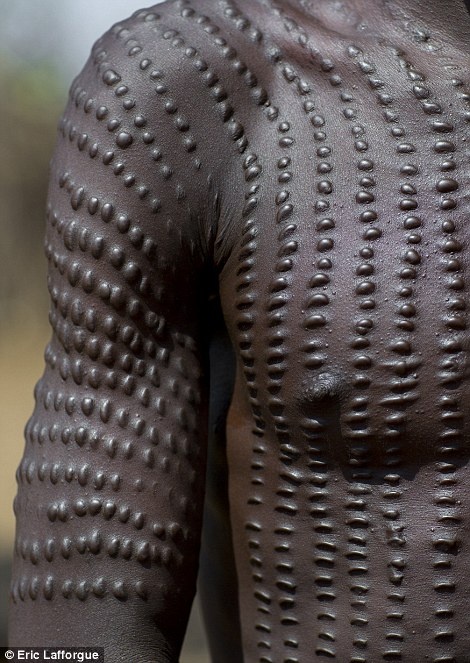 The animal, black panther represents ancestral powers that are given to T’Challa (adherents, n.d.) through traditional herbal medicine. “To fully assume his duties, he sought out the heart-shaped herb which granted him animal-like tracking senses and night vision, and increased his strength.” (adherents, n.d.). The animal representation extends to the under ancestral world, where ancestors are seen transforming from animal black panthers into a human form.

The supernatural characteristic of banal religion refers to beyond natural narrative, unexplainable, abnormal and pertaining to God or deity. (dictionary, n.d.). This means that narratives that are told in films are not always logical, cannot be scientifically proven and can be difficult to explain. The depiction of fictional African cosmology making reference to real-world African cultural experiences and spiritual allusions. Cosmology is a way that one perceives, conceives and contemplates the universe, the set of beliefs, and religious practices through which one understands reality. The “Black Panther” movie is rich in African cosmology.

This can be linked in the scene where T’Challa in Black Panther performs a rite of passage ritual and dies. Another scene is whereby T’Challa was in the mountains, unconscious and the Queen Mother performed a ritual and gave T’Challa traditional medicine, and he became conscious. The Wakandans believe very much on the guidance of the ancestors as they would consult them. The technological advancements go beyond artificial intelligence and science but have elements of superpowers which are given by the black panthers and the vibranium.

Zuri (Forest Whitaker) serves as the holy man whose presence is needed for the legitimate transfer of power from King T’Chaka to King T’Challa, as the spiritual world is intertwined with the political world. The role of shaman, priest, and conjurer, or healer, is critical in African cosmology as these persons may also function as chroniclers. Likewise, Wakanda’s Council of Elders advises on matters of national security, as well as matters of spiritual and moral significance. (Pierce, 2018). This banal representation of a ‘Holy man’ may be contrary to the traditional representation of a Christian holy man or a man of God. Also, it is in contrast with a Traditional Healer, therefore, challenges not only the narrative and connotations but also the representation of these authoritative figures in the religious interpretative communities.

3.4 The Production of Thoughts and Feelings

The usage of banal religion can have its disadvantages whereby producers of media narrate banal religious stories in the offense to other religious groups. The projection of the Muslim religion as violent, blood-thirsty and ruthless groups, did not interpret well to the Muslim religious community. This led to an uprooting of critical discussions. In this case, the film portrayed the kidnapping of girls by the terrorist group, Boko Haram.

One blogger argues that there are 3 religions in the Black Panther movie; one is the religion of the Wakandan people, who worshipped a panther goddess, Bast. Second the religion of the Jabari tribe who worshipped an ape god named Hanuman. The third religion is Islam. He states that the other two religions, which he presumes that they represent Christianity, were victims of the Islamic religion. Though arguments state that the Islam religion referred to the Boko Haram, a Nigerian Terrorist Group, Aziz says:

“Black Panther continues the trend of 100s of movies of depicting Muslims as evil, bloodthirsty, sexual predators and tying it all into a nice edible gift with Allah as the signature. The scene occurs when the prince, soon to be king, attacks a caravan of trucks to save his lover Nakia. The men are holding women who are wearing Muslim headscarves. One soldier places a gun to a girl’s head and says, “I swear by Allah (wallahi) I will kill her.” (Aziz, 2018)

The extract above is evident to Hjarvard’s definition of Banal Religion that it is thought-provoking and a backdrop of religious perceptions of the society. While producers project their narratives, thoughts, feelings, and perspectives on films, also the audience have their own interpretations.

3.5 Backdrop of The Modern Society

The changes in the mediation of religion are influenced by the changes in modern society. Upon the rise of gender and race equality ideologies, those ideologies are then reflected in banal religion. One will reflect on the main purpose of the film Black Panther, was the rise of decolonization in Africa. Africans are now shifting from colonialism, and the film depicted an ideology that Africa is very much capable to create their wealth, technological advancements without the current exploitation Africa has been accustomed to and subjected to. But the most important aspect the film reflected is that Africans need to pride themselves about their African Traditional Religion and it is not inferior from other colonial religious ideologies.

Another ideology narrated often in religion is feminism. Feminism is an ideology that believes in equal rights and opportunities between men and women. In Black Panther, though one may argue that it is still a patriarchal film, however, one sees women playing key roles in Wakanda that would often be played only by men.

One has critically discussed the concept of Banal Religion and made reference to the African Traditional Religion in Marvel’s Black Panther Movie. One has looked in-depth the concept of Banal Religion by defining it. One has stated that Banal Religion is a special kind of religion, and that banal religion is a piece-meal fashion and removed from the framework of organized religion. Both meanings imply that various elements from different institutionalized religions are taken to form and create a new narrative which evokes interpretation and feelings to the audience. Banal Religion does not articulate that it is an inferior form of religion. On the contrary, banal religion is important in a modern society where religion is mediatized. And lastly, critically discussed the characteristics of Banal Religion in Black Panther whereby one mentioned religious symbolism, supernatural, challenging authority, a backdrop of modern society, and production of thoughts and feelings.

Blogger, Media and Marketing student at the University of KwaZulu Natal.